John Friend: It's Not About Yoga

On Tuesday (2/28/12), the NY Times printed an article about John Friend, the founder of Anusara Yoga.  The article is titled Yoga and Sex Scandals: No Surprise Here (http://www.nytimes.com/2012/02/28/health/nutrition/yoga-fans-sexual-flames-and-predictably-plenty-of-scandal.html). 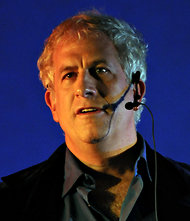 IN RETREAT John Friend's sexual indiscretions upset many devotees of Anusara yoga, which he founded.

The yoga community has been abuzz with the news of John's fall from grace, and the news finally hit the NY Times.


John Friend's behavior flies in the face of all that yoga stands for, and has hurt many teachers and students deeply. It has also added fuel to the fire for those who are always eager to find fault with yoga, yogis, and self-proclaimed gurus.


I suppose that the broader public has a right to be informed about this latest scandal. But I take serious issue with the article written by William J. Broad, author of the recently published book, The Science of Yoga: The Risks and the Rewards, and author of the article in a recent NY Times Magazine issue, How Yoga Wrecks Your Body. His inflammatory tone and lopsided writing once again take aim at yoga, presenting it in a way that is sure to lead those who find yoga strange and frightening farther down a path to rejection of this ancient wisdom tradition that helps millions of people feel better and find more clarity in their lives.


Broad informs us that, with its roots in Tantra, yoga "began as a sex cult - an omission that leaves many practitioners open to libidinal surprise." And there's more: "Hatha yoga ... used poses, deep breathing and stimulating acts - including intercourse - to hasten rapturous bliss."


The truth is that Tantra is but one of several roots of the yoga tree. What Broad conveniently fails to mention is that Tantra was not created as a cult exclusively focused on eliciting rapture and bliss through sexual means. Healthy, appropriate sexual connection was regarded as one way to become united with the Divine Source, but the deeper Tantric journey was a profoundly spiritual quest for that union. Sex was neither a requirement, nor the sole or favored avenue toward union with Source. Good deeds, selfless service, meditation and devotional practices can all lead to a state of union and bliss.


In this article Broad states, "the arousal, sweating, heavy breathing and states of undress that characterize yoga classes have led to predictable results. In 1995, sex between students and teachers became so prevalent that the California Yoga Teachers Association deplored it as immoral and called for high standards."


It goes without saying that these teachers have done immeasurable harm to their followers, and to yoga's reputation. Those who took their guidance blindly, and were painfully misled and abused, are still healing from the trauma. And undoubtedly, abuse of the teacher's role - sexual, and in other ways - continues, protected by shame and, I suspect, a code of silence among the devotees of famous and even not-so-famous teachers.


John Friend, and those who take advantage of their vulnerable followers, would do well to heed the ethical guidelines presented in ancient yoga texts such as the Yoga Sutras of Patanjali, and in the contemporary literature about sexual ethics. They need to learn that they are not above the law, or exempt from the rules guiding professional, ethical behavior.


In Peter Rutter's book, Sex in the Forbidden Zone, he writes, "Any sexual behavior by a man in power within ... the forbidden zone is inherently exploitative of a woman's trust. Because he is the keeper of that trust, it is the man's responsibility ... to assure that sexual behavior does not take place." All yoga teachers should read and take to heart books such as, Teaching Yoga: Exploring the Teacher-Student Relationship, by Donna Farhi, The Ethics of Caring: Honoring the Web of Life in Our Professional Healing Relationships, by Kylea Taylor, or the ethics guidelines established by the California Yoga Teachers' Association and the Yoga Alliance under the guidance of Judith Lasater.


Here's the problem. This is not about yoga. This is about power and the misuse of power by unethical and hypocritical people in leadership roles.


As yoga teachers, we need to hold ourselves to the highest ethical standards. We are ambassadors of yoga to the world, and people will judge yoga based on their observations of our attitudes and behaviors. This is not in question.


What I question is Broad's view that this behavior is especially rampant in the yoga community. That is simply not true; the media regularly reports about sexual abuses, and abuses of power, in every area of human endeavor.


But maybe I am misguided, my views undoubtedly skewed from my many years of yoga study. Maybe I need to reconsider Broad's premise. If he is right, we should all flee our yoga mats and the hundreds of thousands of ethical, well-meaning teachers who have helped us in myriad ways, and run, run, to take refuge in the hallowed halls of power where people wear proper business attire rather than scanty, sweaty, tight-fitting yoga duds. In those safe sanctuaries, we wouldn't find a hint of arousal or heavy breathing or libidinous surprise: the White House, or maybe Newt Gingrich's office, or Arnold Schwartzenegger's digs, or Wall Street, or the offices of our priests and rabbis and therapists and business leaders. Because these well-dressed, well-spoken pillars of our political or spiritual or commercial communities don't have a problem with the excess testosterone predictably evoked in candle-lit yoga studios. These fine leaders wouldn't dream of abusing their position of power. In their care, surely, we would be safe from those few crazy yoga guys with their fancy words and flowing robes and fluid morals.

Posted by stoneyoga at Wednesday, February 29, 2012 No comments:

The stunning announcement last week, that the Susan G. Komen for the Cure Foundation was pulling its funding of Planned Parenthood for breast cancer prevention, screenings and education, was met with outrage by hundreds of thousands of women, and organizations across the country. Taken by surprise, and embarrassed by the national outcry, Komen for the Cure founder Nancy Brinker "sort of" apologized yesterday, though her carefully worded retraction left it unclear whether funding would continue. Brinker's speech was ambiguous at best, offering no firm commitment to renew funding in the future.


What does this have to do with yoga? A lot.


Yoga teaches us to stand up for what is right, regardless of current trends, the "view du jour," or the political climate. By yoga's standards, then, it is very clear that the Komen Foundation succumbed to the pressure of the pro-life lobby ... and that of its recently hired Senior VP for Public Policy, Karen Handel, a staunch pro-life advocate who is opposed to continuing funding for Planned Parenthood, an organization that provides abortion counseling, and abortions.


I'm relieved that intense pressure from life-long supporters -- not to mention the wildly negative press this decision sparked -- forced the Komen Foundation to reverse its decision. This episode has reinforced my belief that we must do what is right, compassionate, and kind, and that we cannot allow political or religious influences to cloud our judgment. Politics and religion should stay away from a woman's reproductive rights.


For the many women who could not afford breast cancer screening without Planned Parenthood, the withdrawal of funding by the Komen Foundation could have been life-threatening.


What will it take for us, collectively, as a country, and as a society, to understand that we cannot permit personal beliefs, political aspirations, or financial considerations, to influence our actions when it comes to right and wrong? As Bob Dylan sang so passionately, " ... how many deaths will it take till we know, that too many people have died?"


I love yoga because it is color-blind, gender-blind, sexual-orientation-blind, cause-blind, political-party-blind, money-blind, belief-blind. Yoga asks only that we find our deepest truths (satya) and live by them, without harming others (ahimsa).


Truth and non-harming: not bad tenets to live by.


Hopefully, with Mayor Bloomberg's grant, and funding restored, thousands of women's lives will be saved. If the Komen Foundation does indeed reinstate its support of Planned Parenthood, it will have found its way to the only truth that matters here: that women must be protected from the political games played at the highest levels of power.


I just wish the Foundation had never taken this step. And that, once taken, it had reversed its decision for the right reasons ... which it did not.


I wish they did yoga.

Posted by stoneyoga at Sunday, February 05, 2012 No comments:

stoneyoga
I'm a yoga teacher and coach dedicated to the promotion of safe, sensible yoga, stress-reduction techniques, and healthy lifestyle choices. I offer professional yoga teacher trainings and mentor yoga teachers from various traditions. Empowering my students by educating them about their optimal yogic and/or life journey is my passion. And, did I mention: I love to laugh!